Scientists have developed a way to build self-piloted “nanoshuttles.” These tiny structures, just a few billionths of a meter long, could someday attack troublesome tissue, carry drugs, or reflect signals back to imaging systems.

Onboard the nanoshuttle itself is a special type of virus called a bacteriophage, or phage for short, that infects only bacteria. The scientists engineer these phages to include peptides—molecules that include at least two but no more than 50 amino acids each—that exactly match certain proteins in the body.

The other part of the guidance system is a kind of phage library that the scientists have spent years building. The work is led by the University of Texas husband-and-wife team of Wadih Arap and Renata Pasqualini.

“We do molecular mapping of zip codes in the body,” Pasqualini, a professor of medicine and cancer biology, told LiveScience. “We now have a large collection of phage particles that display peptides that can be directed at nearly any organ or disease.”

Delivering drugs in a targeted manner will do much for medicine. It will allow, for one thing, the targeted killing of tumors.

In the old days, they gave you treatment that poisoned your entire body, as opposed to only the tumor you were suffering from.

The company will use this upfunding to finance its marketing initiatives and to develop the pilot production and manufacturing program for the new energy cell. Monies will also be used for additional R&D activities related to optimizing OrionSolar’s solar technology for solar home systems in Developing Nations and “Do It Yourself” home installation. OrionSolar’s technology will be ready for market in 2007.

“The solar energy market is growing at a rate of 35 percent annually, but it still only accounts for less that 0.5 percent of the world’s energy consumption,” discussed David Anthony, Managing Partner of 21Ventures. “In the past, solar energy was hindered by the prohibitive costs of solar technology, but with the development of OrionSolar’s new photovoltaic cell, this is no longer an issue. Given this combined with the worldwide need to eliminate our dependence on fossil fuels, 21Ventures believes OrionSolar is poised for tremendous success. They have strategically important Intellectual Property aimed at a very large global market opportunity and are supported by the most talented engineers and scientists in the solar energy industry.”

Researchers of the Sheffield HallamUniversity in the UK have created a technology that allows a person to easily and quickly create a fully 3D scan of his/her face.

This technology is truly amazing, since it constructs a 3D face from one single snapshot directly facing the face to be digitized in 40 ms.

Be sure to check out the videoclips at the source. They are well worth your time.

A few screenshots of one of the video’s (click to enlarge): 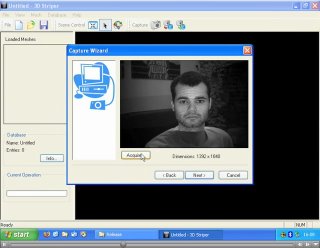 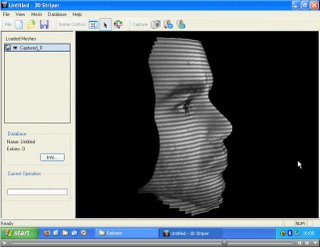 As you can read in The Future Of Virtual Environments, VE’s will become more and more compelling in the near future. As a direct result of that, we will be spending more and more of our time in VE. Eventually, we will be living the bigger portion of our lives there.

Naturally, we’ll want digital representations (that we will likely end up enhancing) of ourselves in such a future. This facescanning technology is just the technology we need in order to do that.

The essays available are:

Also on nanotechnology and the implications thereof (but not listed in the collection above):

Researchers have gotten neurons and silicon to talk to each other.

A specialised microchip that could communicate with thousands of individual brain cells has been developed by European scientists.

The device will help researchers examine the workings of interconnected brain cells, and might one day enable them to develop computers that use live neurons for memory.

The computer chip is capable of receiving signals from more than 16,000 mammalian brain cells, and sending messages back to several hundred cells. Previous neuron-computer interfaces have either connected to far fewer individual neurons, or to groups of neurons clumped together.

Firstly, the researchers genetically modified the neurons to add more pores. Secondly, they added proteins to the chip that glue neurons together in the brain, and which also attract the sodium pores. Applying this neural glue meant that the extra sodium channels collected around the transistor and capacitor connections. This improved its chance of translating the movement of ions into electrical signals on the chip.

Having boosted the electrical connection between the cells and chip, the researchers hope to be able to extend the chips influence further. “It should be possible to make the signals from the chip cause a neuron to alter its membrane and take up a new gene, or something that switches one off,” says Vassanelli. “Now the chip has been developed, we plan to use it to try and switch genes on and off.”

Here is another article reporting on it.

The ultimate applications are potentially limitless. In the long term it will possibly enable the creation of very sophisticated neural prostheses to combat neurological disorders. What’s more, it could allow the creation of organic computers that use living neurons as their CPU.

Again, the boundaries between man and machine have faded a little more today.

InPhase Technologies claims to have broken the record for the highest data density of any commercial storage technology after successfully recording 515Gb of data per square inch.

Holographic storage can dramatically boost capacity as it takes advantage of volumetric efficiencies rather than recording only on the surface of the material.

In this demonstration there were over 1.3 million bits per data page, and 320 data pages spaced 0.067 degrees apart were stored in the same volume of material.

A collection of data pages is referred to as a ‘book’, and InPhase’s PolyTopic recording architecture enables more holograms to be stored in the same volume of material by overlapping not only pages, but books.

The first generation drive has a capacity of 300GB on a single disk with a 20Mbps transfer rate. The first product will be followed by a family ranging from 800GB to 1.6TB capacity.

“We are particularly pleased at the rate of improvement. In April 2005 we demonstrated 200 Gb/in data density and a year later the density has increased more than 2.5 times.”

Imagine how easy it would be to log your entire life in real time given obscene amounts of storage capacity like these.

A number of commentaries on the future of computing, written by leading scientists, has appeared on Nature.

In the last two decades advances in computing technology, from processing speed to network capacity and the internet, have revolutionized the way scientists work. From sequencing genomes to monitoring the Earth’s climate, many recent scientific advances would not have been possible without a parallel increase in computing power – and with revolutionary technologies such as the quantum computer edging towards reality, what will the relationship between computing and science bring us over the next 15 years?

The titles are pretty much self explanatory, with the exception of the first one.

The first one is about quantum computers. Here’s a little quote from the article:

Five years ago, if you’d have asked anyone working in quantum computing how long it would take to make a genuinely useful machine, they’d probably have said it was too far off even to guess. But not any longer.

“A useful computer by 2020 is realistic,” says Andrew Steane of the quantum-computing group at the University of Oxford, UK. David Deutsch, the Oxford physicist who more or less came up with the idea of quantum computation, agrees. Given recent theoretical advances, he is optimistic that a practical quantum computer “may well be achieved within the next decade”.

A quantum simulator would describe and predict the structure and reactivity of molecules and materials by accurately capturing their fundamental quantum nature. This is the sort of employment the early machines are likely to find: doing calculations of interest to chemists, materials scientists and possibly molecular biologists, says Steane.

Since quantum computers can solve exponential problems in seconds that would take a conventional computer billions of years, they are very useful in running simulations of molecular interactions such as the ones going on in our bodies.

This is very important. Simulations are one of the holy grails of medicinal science.

The more accurate and faster our simulations are, the easier it will be to come up with new drugs, solve health problems, and find useful genetic modifications to upgrade the human body a bit.

Technology Review is doing their annual coverage of 10 emerging technologies.

They are up to eight now. The other two will appear in due time to make the list complete.

So far, they have articles on:

Tiny robots can operate on single cells and assemble microelectronics — and could lead to cheap nanoscale manufacturing.

I meant to make individual posts about those two, but things are moving so fast these days (way faster than when I started this blog, not even one year ago) that I’m having a hard time keeping up.

So many things to write about, so little time…

Such is the life of a technology freak. *sigh*

This blog now has a special feature.

You can receive my posts on your PDA or smartphone, so you can be up to date in real time of tomorrow’s technological future… today.

4. After registration on the Newsland site, go to Catalog and choose Our Technological Future by topic.

Here is a preview of how it will look: 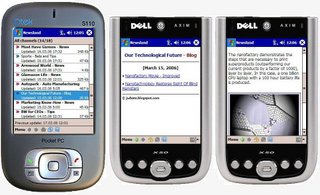 All your friends are gonna think you are so cool!

So what are you waiting for?

It twists and swims – and little else – but the first combination of two molecular machines is an important step on the long path to nanodevices sophisticated enough to, for example, perform repair functions within our cells.

“The next step is to integrate multiple molecular machines” into much bigger devices, says Kazushi Kinbara, who developed the tiny contraption with colleagues at the University of Tokyo, Japan. “That project is now in progress.”

The last decade of research has produced a wide array of nanoscale widgets – ranging from a 350-atom propeller to an elevator with a 2.5-nanometre rise. But virtually all have been a demonstration of principle, and of little or no real use in isolation.

“The motion of just one of these types of constructs is something that researchers spend years on,” says Ross Kelly, who built a molecular motor in 1999 at Boston College. “Joining two moving pieces, and actually getting them to work together, is a considerable achievement.” 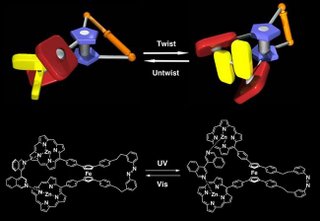 The orange “piston” is opened and closed by light,
causing the red arms on the other side of the blue joint to twist,
operating the yellow pedals