Researchers of the Christian Albrechts University of Kiel have found a new way of making nanotubes self-assemble:

The new method causes extensive hexagonal networks of tubes, intricately branched and connected, to form in less than a second on the surface of a layered crystal. The tubes themselves are prismatic folds, having the cross section of a pitched roof.

Surface nanotube networks suggest numerous applications, including networks of pipes for the storage and transport of minute quantities of materials, or templates for the fabrication of nanowire networks. 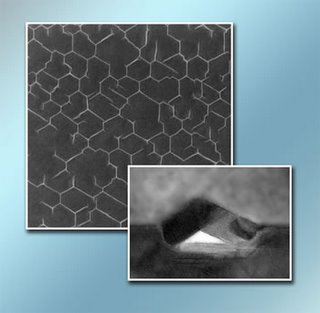 The ability to make detailed nanotube networking is important if science wants to build fullblown nanocomputers. As you can see, we’re getting there.