A nimble, four-legged robot is so surefooted it can recover its balance even after being given a hefty kick. The machine, which moves like a cross between a goat and a pantomime horse, is being developed as a robotic pack mule for the US military.

BigDog is described by its developers Boston Dynamics as “the most advanced quadruped robot on Earth”. The company have released a new video of the robot negotiating steep slopes, crossing rocky ground and dealing with the sharp kick. View the impressive clip here (28MB Windows media file).

“Internal force sensors detect the ground variations and compensate for them,” says company president and project manager Marc Raibert. “And BigDog’s active balance allows it to maintain stability when we disturb it.”

This active balance is maintained by four legs, each with three joints powered by actuators and a fourth “springy” joint. All the joints are controlled by an onboard PC processor. 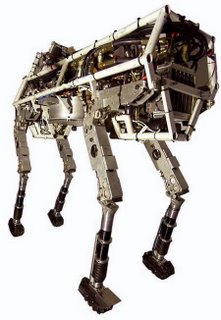 It hasn’t been long since Asimo the robot learned to walk and then run. Now there is a robot which does an impressive job at maintaining its balance, even if it receives a forceful kick.

As robots are getting smarter, they will start taking over many of our jobs that require only basic cognitive skills, such as window washing, dish washing, etc. This is going to have certain implications for our society as a whole.

Be sure to watch the movie clip (right-click and save). It is very impressive. Also notice how incredibly natural the movements of this robot are. It’s artificial brain has learned to walk almost the same way that real mules have.

Kind of sheds a whole different light on how we look at our own biological brains, doesn’t it?

After watching this, can you imagine that one day we will build a superior artificial intelligence?