‘We can rebuild him. We have the technology.’ Almost.

Three decades after the hit television programme The Six Million Dollar Man described how the broken body of a former astronaut was rebuilt with mechanical parts, scientists are closer than ever to creating such cyborgs.

The character Steve Austin, played by Lee Majors, became a 1970s pop culture icon after his legs, right arm and left eye were replaced in an operation that gave the world the catch phrase: “Gentlemen, we can rebuild him. We have the technology.”

Yesterday, at the Experimental Biology 2006 meeting attended by around 12,000 delegates in San Francisco, leading scientists explained in a symposium on “The $6 Billion (Hu) Man” how much of what was once fiction is becoming reality – including electronically powered legs, arms and eyes. 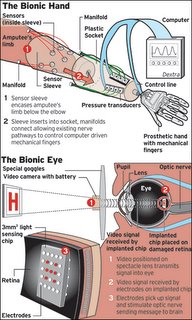 It’s the same with sixties Star Trek. Much of what was considered extremely hi-tech in that show, is now considered old fashioned.