In follow-on work to last year’s groundbreaking invention of the world’s first single-molecule car, chemists at Rice University have produced the first motorized version of their tiny nanocar.

The motorized model of the nanocar is powered by light. Its rotating motor, a molecular framework that was developed by Ben L. Feringa at the University of Groningen in the Netherlands, was modified by Tour¹s group so that it would attach in-line with the nanocar¹s chassis. When light strikes the motor, it rotates in one direction, pushing the car along like a paddlewheel.

The nanocar consists of a rigid chassis and four alkyne axles that spin freely and swivel independently of one another. The four buckyball wheels that were used in the original version of the nanocar drained energy from the motor and were replaced with spherical molecules of carbon, hydrogen and boron called p-carborane.

The nanocars, which measure just 3-by-4 nanometers, are about the same width as a strand of DNA, but much shorter than DNA. About 20,000 of these nanocars could be parked, side-by-side, across the diameter of human hair.

They are the first nanoscale vehicles with an internal motor. 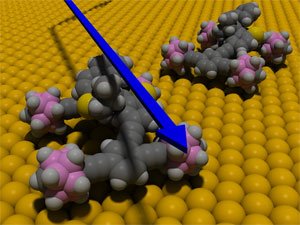 All in all, a great milestone towards full blown, advanced nanotechnology.