The new breed of soldier: Robots with guns.

Spurred by the risks from roadside bombs and terrorist ambushes, the military is aggressively seeking to replace troops with battlefield robots, including new versions armed with machine guns.

“There was a time just a few years ago when we almost had to beg people to try an unmanned ground vehicle,” says Marine Col. Terry Griffin, manager of the Robotic Systems Joint Project Office in Huntsville, Ala. “We don’t have to beg anymore.”

Although the Pentagon initially focused on aircraft, such as the Predator drone, now new ground- and sea-based robots are being developed and tested, military records show. For example: 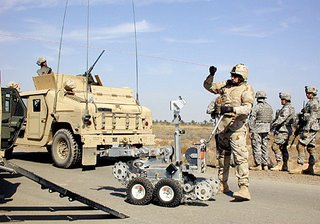 Eventually, wars won’t be fought by humans anymore. Think about it… human soldiers are a major drag when it comes to fighting wars efficiently. Next to being error prone, they require:

War will basically turn into a game of chess, with humans as the players and robots as the pieces. Ofcourse, whoever has the best technology wins.