Cyber-soldiers may save lives

Since the Iraq war began in March 2003, the Pentagon has counted 2,376 fatalities among U.S. troops, with nearly one-third, or 767 deaths, caused by booby traps known as IEDs, or improvised explosive devices.

Now, recent advances in robotics offer a way to use machines to assume some of the deadliest jobs on the battlefield.

The military’s demand for such technology has been practically insatiable. Everett said that in 2004, U.S. military forces in Afghanistan and Iraq were operating a total of 163 robots known as UGVs, or unmanned ground vehicles. By the end of this year, that number is expected to reach 4,000, according to Pentagon estimates.

Recent advances in autonomous technology have been so rapid that Everett predicts U.S. soldiers eventually will work with robots in the same way a hunter works with a bird dog.

“Troops of the future are going to be equipped with a lot of electronics imbedded in their uniforms and their weapons,” he said. Ideally, such technology will allow a robot to follow a soldier’s commands, such as, “Go through the door in front of you.”

To do that, however, a robot needs to be smart enough to know what a door is and how to find it, Everett says. A robot that can navigate on its own, or perhaps follow a soldier on patrol, represents a breakthrough in technology.

In recent months, Everett’s team has come close to accomplishing that with an all-terrain robotic vehicle, or ATRV, about the size of a lawn mower. In one field demonstration, the ATRV entered a World War II-era bunker in Point Loma, explored the interior without human guidance and generated a rough map that depicts the interior rooms and hallways. 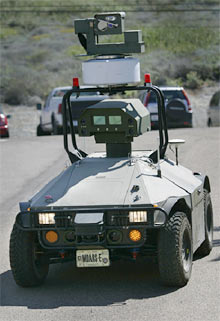