An artificial insect “eye” could give surveillance cameras and surgical instruments the ability to see almost everything around them.

The ultra-wide angle compound lens, which is about the size of an insect’s eye, was developed by US researchers at the University of California, Berkeley. The ‘back end’ of the camera is yet to be produced.

The eyes of insects such as bees and dragonflies are made up of tens of thousands of tiny components called ommatidia. These all point in different directions to give the insect a very wide field of vision.

Inspired by this, Luke Lee and colleagues developed an artificial compound eye consisting of a moulded polymer resin dome filled with thousands of light-guiding channels, called waveguides, each topped with its own miniature lens.

The artificial eye could be used to create surveillance cameras, cellphone cameras, and surgical endoscopes with a much wider field of vision, the researchers say. The whole eye is 2.5 millimetres in diameter. Each artificial ommatidia consists of a lens attached to a polymer waveguide that directs light towards the centre of the eye. 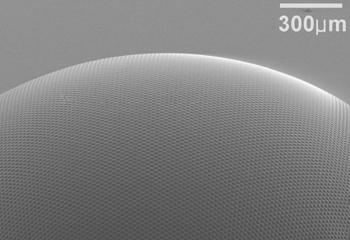