Tiny Electrodes for the Brain.

A new type of polymer nano electrode could make brain implants, including those used to treat severe cases of Parkinson’s, far safer, and it could also make attempts to restore vision and movement with direct brain-machine interfaces more feasible. Rodolfo Llinas, professor of neuroscience at New York University, and researchers at MIT have developed a nanowire electrode just 600 nanometers wide that can send and receive signals to the brain.

The electrode developed by Llinas and coworkers is so small that it could be inserted through an artery, perhaps in the arm or groin, and threaded up to the brain. Because the electrode is a small fraction of the size of a red-blood cell and flexible, it can be snaked through the smallest blood vessels, getting close enough to neurons deep in the brain to detect and deliver electrical signals.

One current treatment for severe cases of Parkinson’s, called deep brain stimulation, involves implanting electrodes that deliver high-frequency electrical pulses which shut down parts of the brain responsible for the disease’s symptoms (see “Brain Pacemakers”). Such treatments, however, are risky and expensive, in part, because they require that a patient’s skull be opened to surgically insert electrodes into brain tissue.

“Not having to open the skull would be a clear benefit over what we’re now doing,” says Jeff Bronstein, neurologist at the UCLA Medical School, who says thousands of Parkinson’s patients have undergone the deep brain stimulation procedures. 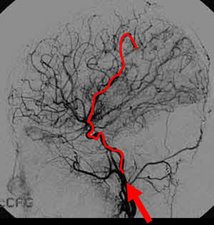