A REVOLUTIONARY drug that could help overcome HIV’s growing resistance to existing antiviral drugs is about to be tested in combination with standard antivirals. Called PA-457, it is the first of a new class of anti-HIV compounds called maturation inhibitors. The drug is still in its early stages, and will not be generally available for at least three years.

Up to 80 per cent of HIV-positive people on treatment show resistance to one or more of their drugs, according to Graham Allaway of Panacos Pharmaceuticals in Gaithersburg, Maryland, which is developing PA-457. Panacos hopes to begin trials this month to test how well the drug works in patients whose existing drug regimes are failing.

PA-457 aims to overcome this resistance by attacking HIV on a new front. Many existing drugs work by blocking reverse transcriptase, an enzyme that enables HIV to replicate within a cell. Others disable protease, which helps to assemble the virus into particles that infect other cells.

Recent experiments in collaboration with Michael Sakalian and his colleagues at the University of Oklahoma Health Sciences Center in Oklahoma City have shown that PA-457 works in a different way. It attacks HIV by disrupting formation of a conical shield, called the capsid protein, which stores and protects the RNA heart of the HIV particles as they bud out from infected cells.

Previous lab experiments on infected human cells have shown that the drug defeats strains of HIV which are resistant to other anti-HIV drugs. A small human trial of the drug, reported last August, showed that when given on its own it rapidly clears most HIV from the blood, driving down the levels tenfold in a matter of hours. 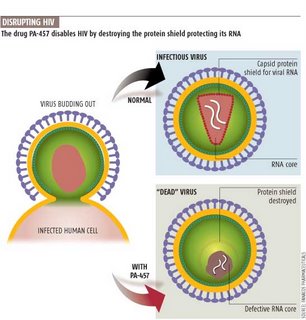 HIV isn’t the only disease against in which science is making great progress. Also see GUMC Research Leads to First Cancer Vaccine.