Sitting stone still under a skull cap fitted with a couple dozen electrodes, American scientist Peter Brunner stares at a laptop computer. Without so much as moving a nostril hair, he suddenly begins to compose a message — letter by letter — on a giant screen overhead.

“B-O-N-J-O-U-R” he writes with the power of his mind, much to the amazement of the largely French audience of scientists and curious onlookers gathered at the four-day European Research and Innovation Exhibition in Paris, which opened Thursday.

Brunner and two colleagues from the state-financed Wadsworth Center in Albany, New York were demonstrating a “brain computer interface (BCI),” an astounding technology which digitalizes brain signals emitted as electrical impulses — picked up by the electrodes — to convey intent.

Scientists have been experimenting with ways to translate thought directly into action for nearly two decades, but BCI has only recently begun to move out of the laboratory and into the daily lives of those trapped inside bodies that no longer respond to their will.

Possible applications extend beyond the written word into physical movement — it is only a matter of time, Sellers says, before the same technology is used to operate motorized wheel chairs. “We can do already. But it is a complex problem, and for now it would be unsafe,” she says. 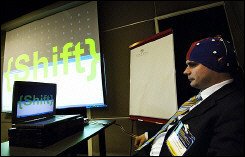