Taking issue with the perception that computer models lack realism, a Sandia National Laboratories researcher told his audience that simulations of the nanoscale provide researchers more detailed results — not less — than experiments alone.

Fang derided the pejorative “garbage in, garbage out” description of computer modeling — the belief that inputs for computer simulations are so generic that outcomes fail to generate the unexpected details found only by actual experiment.

Fang not only denied this truism but reversed it. “There’s another, prettier world beyond what the SEM [scanning electron microscope] shows, and it’s called simulation,” he told his audience. “When you look through a microscope, you don’t see some things that modeling and simulation show.”

“We need to sit back and put our mindset in a different mode,” he told his audience. “We’re all too busy doing [laboratory] research [instead of considering] how we can leverage resources to push our science to the next level.” 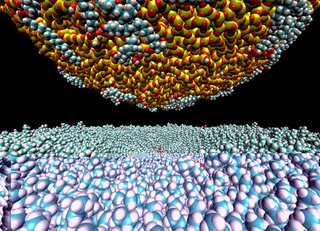 I’ve said it before elsewhere on this blog and I’ll say it again: simulations are the future of science.

Soon, all computers worldwide will be linked up to form one giant virtual supercomputer. Computational power will be readily available to run very sophisticated simulations of multi-cellular systems or even organs.

Sidenote for all animal lovers out there: this means laboratory testing animals will be part of the past.

These simulations will be a boon to science. I suspect that we may expect an enormous boost in health and longevity to come forth from science, once it has shifted into next gear.

I’ve also said that the virtual world is better than the physical world in every aspect. If you care to read about it, take a look at The Future Of Virtual Environments.

One thought on “The Future Of Cell Simulations In Science”