The self-driving Golf that would give Herbie a run for its money.

But now German car giant Volkswagen has turned fiction into reality by unveiling a fully automatic car which really can drive itself – and at speeds of up to 150mph.

It can weave with tyres screeching around tricky bends and chicanes, and through tightly coned off tracks – without any help or intervention from a human.

The GTi has electronic ‘eyes’ that use radar and laser sensors in the grille to ‘read’ the road and send the details back to its computer brain. A sat-nav system tracks its exact position with pin-point precision to within an inch.

The car can then work out the twists and turns it has to negotiate – before setting off at break-neck speed through a laid out course on a test track.

On a race circuit, it drove itself faster and more precisely than the VW engineers could manage – and can accelerate independently up to its top speed of 150mph.

The astonishing prototype was developed initially to help Volkswagen engineers test their vehicles.

But in an age when rapidly advancing technology and the Big Brother State is increasingly taking responsibility away from the driver – with the onward march of electronic speed limiters, collision avoidance systems, cruise control, satellite navigation, and pay-as-you-drive road tolling – the self-driving robot car is not such a distant prospect.

And many of the elements which make up its engine will be making their way into showroom cars within just a few years – just as sat-nav, collision avoidance sensors and anti-lock brakes have done in recent years.

A Volkswagen spokesman said: ‘It really is a self-driving Golf. It steers, brakes and accelerates. And it races through handling courses independently. It can accomplish this at full performance and at the limits of its capabilities.’

The computer calculates where and at what speed the GTi has clearance between the cones. The GPS satellite enables navigation to within less than an inch.’ 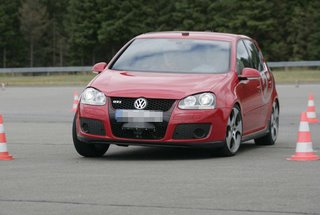 The miracle machine itself